About the 2018 Volkswagen Atlas

Sport utility vehicles have been the talk of the automotive world. These vehicles are sought out because of their passenger and cargo capacities, their ability to tow heavy weight behind them, and their overall versatility. Volkswagen is a well-known automaker all over the world, and while it has been offering drivers such SUVs as the Tiguan and Touareg, a full-size, three-row SUV has not been part of the lineup. That is all about to change with the all-new 2018 Volkswagen Atlas, and if you are in the market for one in the Las Vegas NV area, you can reserve yours today. The Atlas has seating for as many as seven people, and you can open it up to a maximum of 96.8 cubic feet of maximum cargo capacity depending on your requirements on any given adventure.

When will the 2018 VW Atlas be released?

The 2018 Volkswagen Atlas is expected to be delivered to dealerships in May 2017. Two engine options will be available across its five trim levels: a four-cylinder turbocharged and direct-injection 2.0-liter TSI engine capable of producing 235 horsepower, and a 3.6-liter VR6 engine capable of delivering 276 horsepower. The five trim levels are the S, SE, SE with Technology, SEL, and SEL Premium. The launch version of the S trim will come with the VR6 engine and start at $33,500, but later on the S trim will be available with the four-cylinder engine and a base price of $30,500. We are excited about this addition to the Volkswagen lineup, and if you are too, go ahead and click on the RESERVE NOW button above, and we can get the ball rolling! 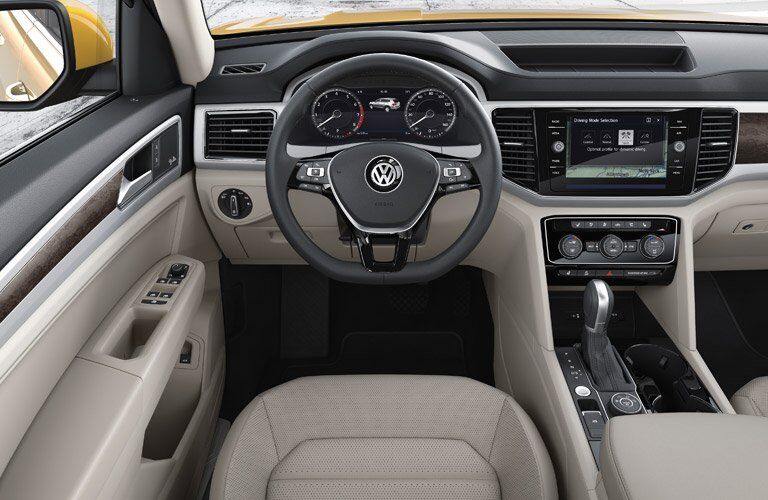